Over 800,000 Muslims reside in New York City and several million Hispanics. Most Muslims work between 70-80 hours a week and the most exposure they have to Christians is happening at the workplace where they are working alongside Hispanic Christians. Because the culture is so similar between Hispanics and Muslims a lot of the barriers are removed.

Many Hispanics are embracing Islam and you can even find a Hispanic mosque in Harlem but at the same time many Hispanics are intermarrying and are using this as one opportunity to share the Gospel. As a result many Muslims are investigating Christianity.

More Hispanics are needed to reach out to Muslims in Metro NY. Listen to this short video with Chris Clayman subtitled in Spanish.

Posted by Unreached New York at 10:07 AM No comments:

Volunteers will come to New York and be trained in meeting people on the street, sharing their testimony and the gospel with them, and being able to tell if the person is a person of peace.  This is a very strategic role that you will play as we sift through many people in the city to find those the Holy Spirit is at work in.  These ‘Sifting Weeks’ are very strategic as we seek to bring the gospel to unreached peoples here in the city.  For information and dates on ‘Sifting Weeks’ NYC 2013 see below. 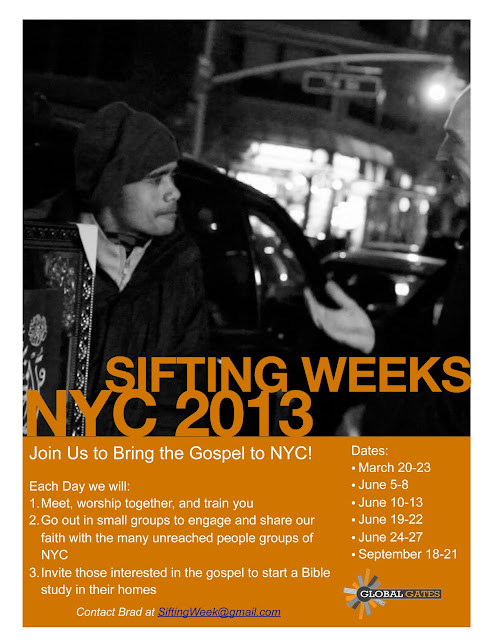 Links to Get Involved